Is it possible to resurrect civility amid a tsunami of toxicity? This group is trying. Katie Zezima, The Washington Post 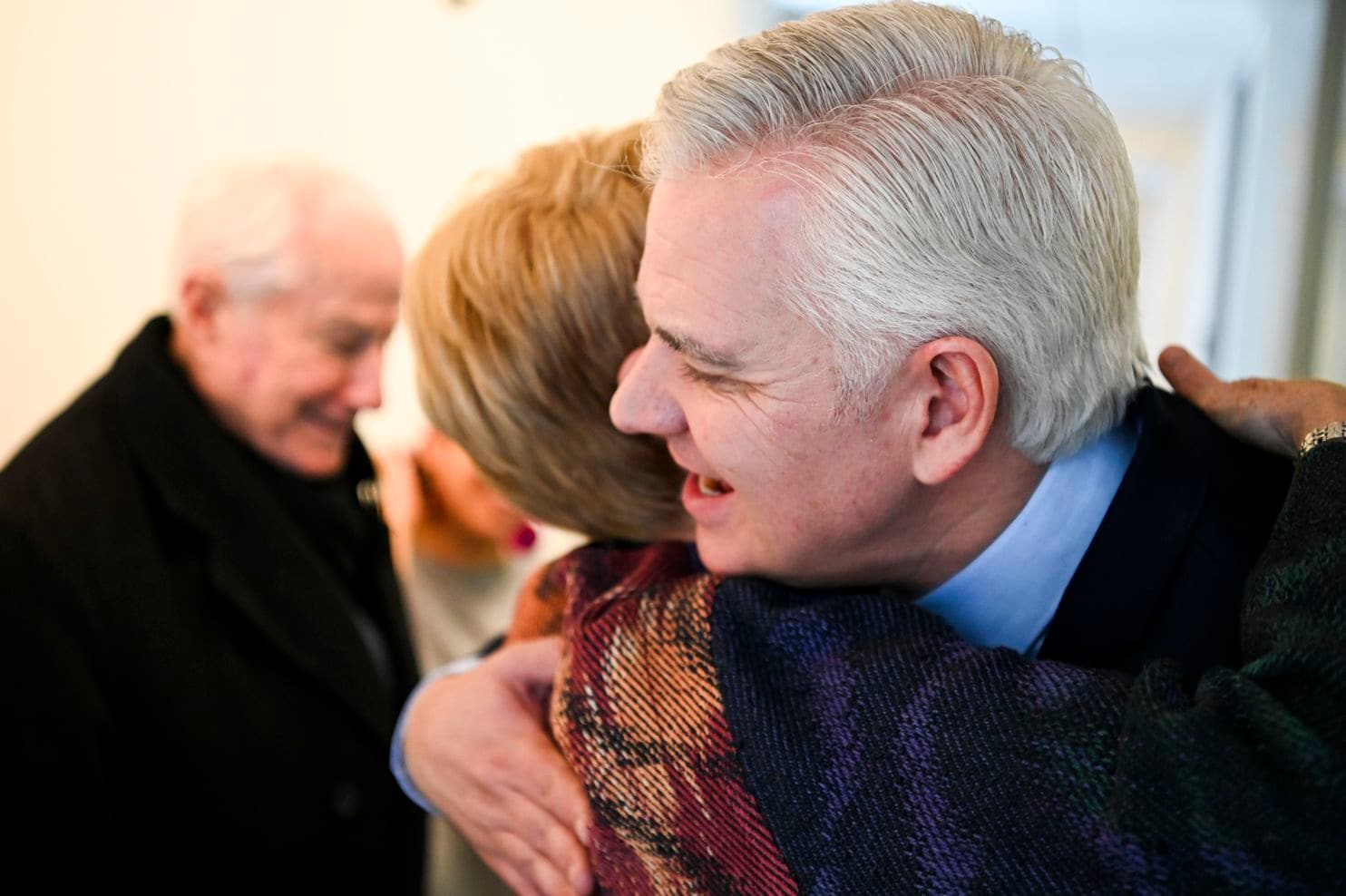 Keith Allred and Carolyn J. Lukensmeyer hug after a National Institute for Civil Discourse discussion on civility and partisanship in Washington on Friday. Allred is the new executive director of the group, which aims to help Americans bridge partisan divides with civility. (Carolyn Van Houten/The Washington Post)
By Katie Zezima

A president slams a table and walks out of a meeting. A longtime congressman consistently makes racist comments. A gubernatorial candidate threatens to stomp on his opponent’s face with golf spikes. Family members no longer speak because of political differences. Twitter fights seem constant. Cable news panels are filled with shouting.

While it might seem that civility has been completely lost in politics and significantly eroded in both public and private life, one organization is trying to push back against the tsunami of toxicity and contention sweeping the country. It’s a development that, according to polls, Americans desperately want.

The National Institute for Civil Discourse is urging Americans to be respectful of one another again. The institute and its new executive director, Keith Allred, are behind an attempt to move elected officials and citizens toward civility at a time when discourse is degrading, with the hope that people will remember how to disagree with one another in good faith.

“It’s not the difference of opinion on policy that makes us bitter,” Allred said. “But thinking they’re a bad person.”

Allred created the group CommonSense American, a bipartisan organization that weighs in on issues such as immigration and campaign finance reform. It is a national offshoot of a group he created in Idaho, which worked with the state legislature. The group’s staff creates policy papers it sends to members, who then contact their elected officials. The goal is to arm people with information about various topics and have them weigh in with elected officials in an authentic way without the use of canned talking points or vitriol.

[What unites us? 102 people contemplate what it means to be American in a time of upheaval]

The institute has gone into communities to train more than 12,000 people in civil discourse and has been hosting more than 500 “civility conversations” nationwide as part of statewide initiatives in Arizona, Iowa, Maine and Ohio.

“We’ve polarized not only our political discussion, but our personal interactions,” said former congressman Jim Kolbe (R-Ariz.), who is on the organization’s advisory board.

Putting people of differing views together is more crucial than ever, said Carolyn J. Lukensmeyer, a former executive director of the group. As people retreat into their corners on social media and increasingly live in places where they are surrounded by the like-minded, talking to those on the opposite side of political arguments often doesn’t happen.

Lukensmeyer said the efforts have included weekly discussions at breweries and coffee shops among people holding disparate views. The institute has filmed interactions between people with differing backgrounds and opinions to show how they can respectfully disagree and find common ground. It is looking for a streaming service to distribute the series.

“Once they’re in an environment where they meet, they have more in common than expected,” she said.

Polls show that Americans want to see a return to civility. Ninety-one percent of registered voters said the lack of civility in politics is a “serious problem,” according to a 2018 Quinnipiac University poll. Sixty-eight percent of those surveyed in a Pew Research poll from July said it was “essential” for people in high political offices to maintain a tone of civility and respect in politics. Former Senate majority leader Thomas A. Daschle (D-S.D.), co-chair of the institute’s board, said the fate of America rests on a return to civility, both in politics and public life.

“It’s about keeping this republic,” he said.

To nudge along elected officials, the institute created a program called Next Generation, in which it shows state legislators how to work across the aisle. Despite its intense polarization, Congress even has a civility caucus, with members visiting one another’s districts to see what life is like and to learn from a different set of constituents.

The institute sponsored workshops on how to run a positive political campaign over the summer; 11 of the 18 participants were actively running in an election. Nine of them won.

The group was founded in 2011, months after a gunman in Tucson killed six people and wounded 13, including then-Rep. Gabrielle Giffords (D-Ariz.). Days before she was shot, Giffords had discussed creating an organization at the University of Arizona to study how to make conversations about politics more civil.

“It seems like it’s as divisive as it’s been in our lives,” said Mark Kelly, Giffords’s husband.

But he said he sees people open and willing to discuss differences. He has long text and email conversations with a good friend who owns a bar in Tucson and has the opposite political beliefs. Kelly and his wife created Giffords, an organization opposing gun violence, and protesters often show up to events where the couple appears. Kelly talks to the protesters, telling them about the guns he owns and hearing out their point of view.

“It’s really important to listen to people,” he said.

While members of the institute say that civility appears to have reached a nadir, they are optimistic that a demand for respect will win out.

“The American people are going to be the saving grace,” Allred said. Scott Clement and Emily Guskin contributed to this report.